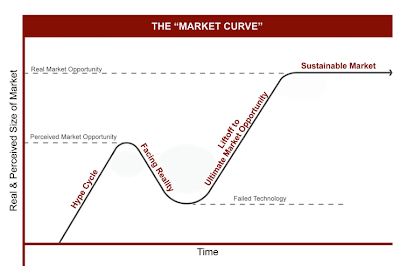 Below is a link to my post in Techcrunch about "The Market Curve": a theory about the life cycle of Markets.

First, a period of overheated expectations (the "Hype Cycle") followed by an extended trough (called "Facing Reality") when the market is not able to deliver.   Ultimately, when the core technologies, the right products and the leading companies are in place, strong technology markets become much larger than contemplated even during the Hype Cycle (called "Liftoff").

Link to Entire Blog in Techcrunch

In this first post, I describe the concept of the Market Curve and how the Internet, Mobile and Cloud markets have navigated the Curve.  A key takeaway is that the best entrepreneurs and investors have conviction, even during market troughs, and take advantage of that time to build and invest in leading companies whose technologies and products are what take markets to their ultimate potential.  Trough-breaking examples referenced in this post include: Internet (Amazon.com & Youtube),  Mobile (Apple), Cloud (Salesforce.com & Successfactors).

In my next post (next Sunday in Techcrunch), I will give my perspective on where newer markets like Proximity Mobile Apps, Daily Deals and others are on the Curve.


Thanks Techcrunch for running these posts!
Posted by Doug Pepper