Thrilled to Back Skilljar & Help Onboard Customers at Scale

Today, I’m excited to announce that Shasta Ventures has invested in Skilljar, a Seattle-based customer enablement platform. We’ve invested alongside our friends at Mayfield as well as existing investor Trilogy Equity Partners.

Investing in Skilljar was an easy decision. The reasons why shed light not only on my approach to investing in enterprise software but also something bigger—namely, how changes in customer behavior have created new challenges and opportunities for modern enterprises today.

4 Reasons Why We Invested 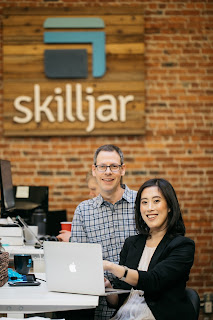 First, Shasta looks for top teams to get jobs done, and Skilljar met that standard and then some.

Co-founders Sandi Lin and Jason Stewart cut their teeth working at Amazon together. While running Amazon Marketplace, Sandi, who’s an MIT and Stanford Business School alum, noticed how hard it was to onboard merchants. If the merchants didn’t learn quickly how to use Marketplace’s core features, Sandi would lose them. Keeping customers requires training them, Sandi concluded.

Enter Skilljar. In 2013, Sandi and Jason left Amazon and launched the company as an advanced learning management system for the 21st century. Its cloud-based software allows companies to create online courses and universities tailored for customers to learn their products.

And that’s where our Reason Two for investing in Skilljar comes into play.

Sometimes we invest before a team even has a product, but that’s for another blog (this one, actually). Often, though, we invest in great teams that have market-leading products. After speaking with customers of Skilljar, which were among the best I’ve done in 17 years of investing in software companies, I realized that’s exactly what Skilljar has created.

Reason Three: traction. Skilljar revenues grew 3X year over year in 2017. And despite little marketing effort, more than 100 companies, including Verizon, Cisco, Zendesk and U-Haul, are currently using Skilljar’s platform. These are large companies that need to on-board customers at scale. After evaluating the competition, Skilljar is their preferred tool.

Venture Capital today has a lot of sharp elbows, but cooperation between firms used to be a lot more common. Fred Wilson recently wrote about his own nostalgia for splitting deals, and I agree 100% with him about the benefits—shared risk, resources and networks. Yes, believe it or not, I still believe this industry can and should be a team sport. My friend Rajeev Batra at Mayfield and I co-invested and worked together on Marketo and Newscred, so Skilljar represented a great, new opportunity for us to repeat success.

Underlying all of these reasons, however, is how Skilljar fits into a new world of customer behavior—and into my investment strategy.

Over the last decade, both enterprise and consumer-facing software companies began shifting away from selling packaged software through a one-time license payment and moved toward selling a subscription continuously (i.e., they moved from a pay-for-product world to a pay-for-service one). You now rent software.

Welcome to the Subscription Economy!

And, this isn’t a trend that’s restricted to software. The most hardware intensive of all industries—auto—has pivoted towards subscriptions. BMW calls itself a service company these days, and GM began trying a subscription plan for Cadillacs last year. The Wall Street Journal called it a $1,500-dollar-a-month “Netflix for Cars.”

This move towards recurring sales also means a seismic shift in the way companies advertise and market. For one, the relationship with the customer has changed dramatically. It’s no longer a one-time occurrence, it’s an ongoing, ever-evolving exchange. Accordingly, companies increasingly demand better tools to optimize customer success.

Skilljar focuses on the core aspect of the customer journey: getting customers engaged with products! After investing in many companies over the years, I know that the biggest determinant of customer success is how well and how fast customers are on-boarded. The trick is training customers quickly and easily – but at their own pace. Skilljar’s platform does just that. It integrates seamlessly with Salesforce.com, Marketo, Totango and other customer success platforms and personalizes tutorials based on the learning needs of its customers.

On behalf of Shasta, congratulations to Sandi, Jason and the entire Skilljar team! We’re looking forward to seeing Skilljar help enterprises better serve their customers and do it at scale.